Bots Will Not Replace Humans: A Conversation With Laiye Lead Presales Engineer

This post is a part of Laiye Voices series, where we sit down with our team members to discuss key topics and issues within the technology space.

With the pandemic-driven acceleration of technological advancement, businesses have been speedily introducing digital workers into the workplace – a move which some fear to be a step forward towards a somewhat dystopian future where it is the humans who are ruled and commanded by robots. Alarming and sensationalistic, this idea continues to remain popular in science fiction. The reality, however, is a little less dramatic (and makes for bad TV). In our conversation with Laiye’s lead pre-sales engineer, Afan Mawoule, we discuss some of the most common misconceptions and dig into why robots cannot and will not replace humans. 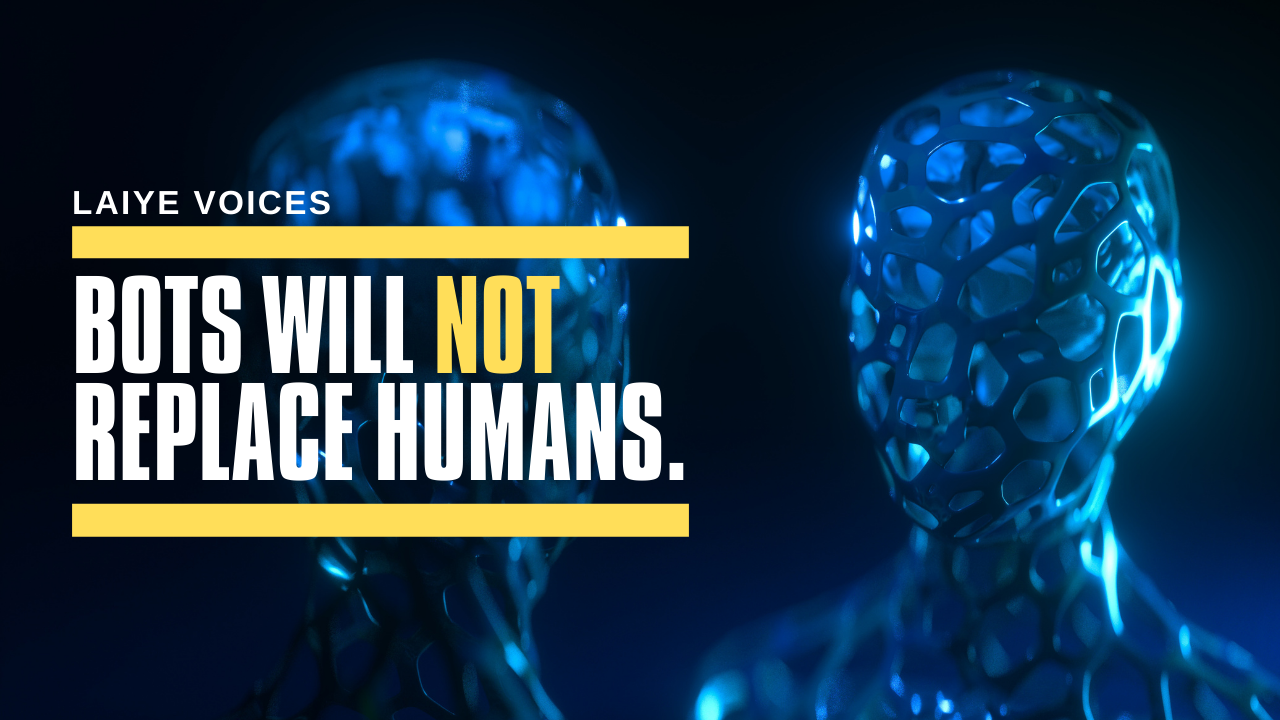 Laiye: It seems that the vilification of bots is moving beyond fiction and seeping into reality as more and more people fear they will be made jobless by digital workers. Just last year, a US presidential candidate, Andrew Yang, strongly emphasised this exact concern in his campaign. Why is there such a growing anxiety over automation and technology in this current time?

Afan: There always has been uneasiness over technology at the beginning of every industrial revolution. At the start of the very first industrial revolution, there was opposition to mechanisation. But what happened afterwards? Productivity skyrocketed, living standards improved, and businesses flourished. This has always been the pattern in the early stages of any technological change. There is always fear and anxiety followed by an improved quality of life. The technophobia is nothing new – in the face of change, there will always be resistance.

Laiye: What about the concern that the technological advancements will cause mass unemployment?

Afan: While I can see why people think this, it’s the most frustrating misconception – because the truth is the opposite. The current industrial revolution will not lead to a decrease in jobs but rather an increase. In fact, the World Economic Forum predicts automation will create nearly 58 million more jobs. This may be surprising to many people, but once they fully understand the impact of automation, they will see why this will be the case.

Many of the automation projects I’ve led involved us deploying Laiye RPA to tackle the drudgery of mundane, repetitive jobs and accelerate the overall operational speed of an organisation. It's not that the staff members were replaced, but they were simply unburdened from monotony, and instead could direct their focus on areas requiring human thought.

Laiye: But many are concerned that bots would soon be able to do what you just referred to as “human-specific tasks”.

Afan: Yes, AI-powered bots can handle a wide variety of tasks, including recognizing patterns to make certain decisions as well as automating some cognitive functions, but humans will always have the upper hand. Let’s consider computing capacity, for instance. To measure computational performance, we use floating-point operations per seconds (FLOPS), which is used to establish the number operations that can be performed within a certain period of time. The world’s most advanced supercomputer, Japanese Fugaku, has a computing capacity of 442.01 petaFLOPS. In comparison, an average human brain is estimated to have 1 exaFLOP which converts into 1,000 petaFLOPS, making it 2.26 times more powerful than Fugaku.

Let’s not forget the costs. No business will use supercomputers when you look at the fact that Fugaku itself cost 1.2 billion to build. Imagine the costs for maintenance, labor, and power consumption. Not to mention the development time.

Humans will always have more capabilities than machines. Experts generally agree that we have a long way to go until computers can truly match humans.

Laiye: So, you’re saying that humans will continue to engage in a great deal of tasks and robots will simply help rather than replace?

Afan: Exactly. It will be a collaborative relationship rather than a competitive one. Most recently, I’ve worked on a project in which a recruiter received over 1,300 CVs per day for a certain position. Her team would spend roughly two minutes reading each CV to determine whether or not a candidate should be shortlisted for an interview. This mundane process would take two weeks! But with the help of RPA bots working 24/7, the shortlisting procedure was reduced to a day. The interviewing and the final employment decision would still rest with the human.

What many people don’t realise is that bots only help with one aspect of a project, the ones that the human employee probably wouldn’t be too enthusiastic about doing, anyway. Processes like data entry, report generation, and account reconciliation. Bots simply take over the grunt work while it’s the humans who negotiate, collaborate, and make crucial decisions. Such kind of work will always require human beings.

Laiye: One last question, do you think the robocalypse will ever be upon us?

Afan: There definitely will be more robots in the workplace and in our lives, but for the better. They will certainly help us but never replace us. The truth is that we underestimate ourselves. We have always reinvented the world, made transformational progress, and that’s exactly what we’re doing now.